Hey Rider! We're attached at the hip to another site, rideadv.com, that is dedicated to bring you gear reviews, bike reviews, riding tips and more.

So it would be cool if you gave us your email. We don't share ANY info about you. But we'll share the content we get with you. We'll also let you know of any deals that come our way.

So, WELCOME to the Ride Adventures Family 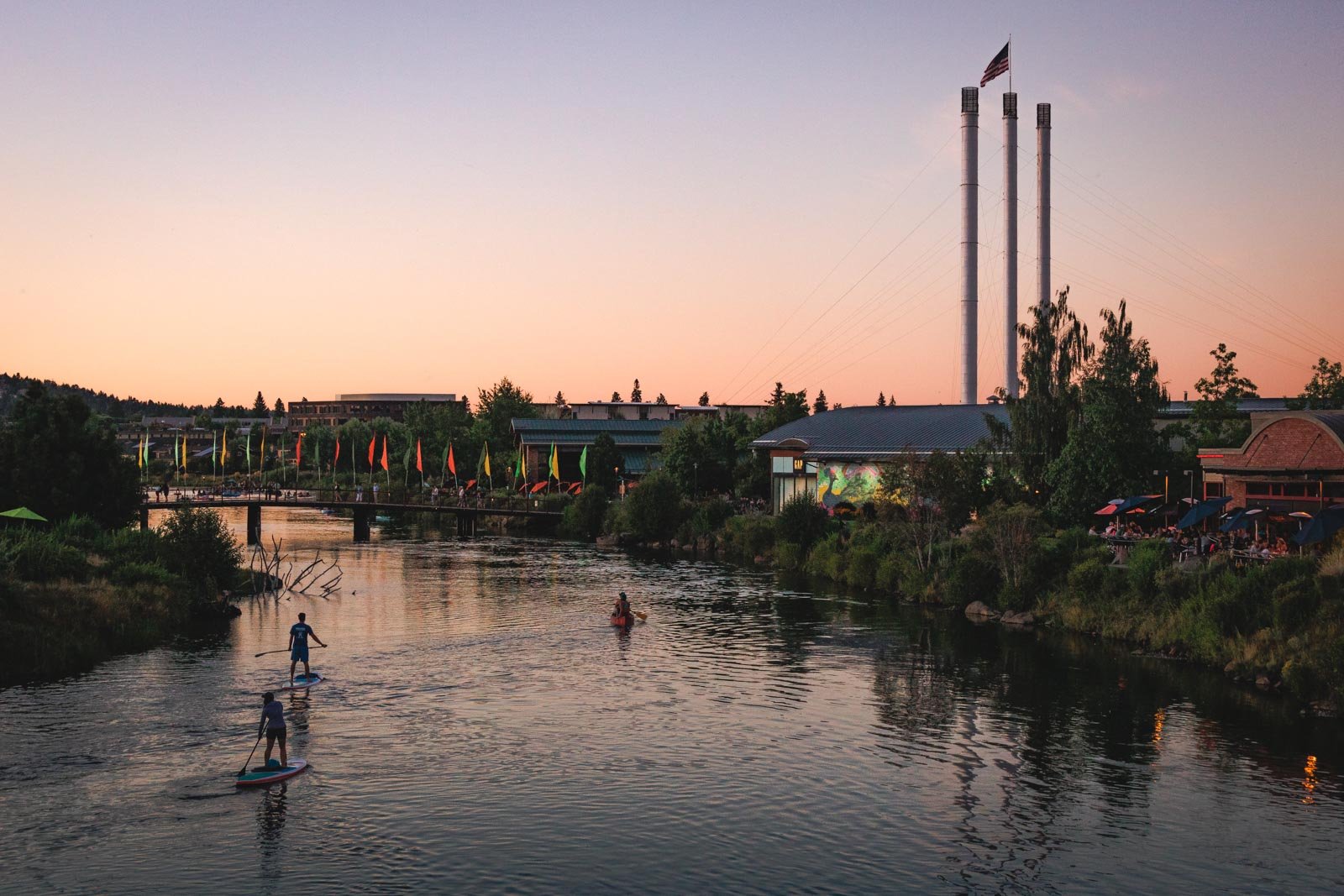 Welcome to Bend, and we hope you can arrive a little earlier and enjoy this outstanding town for outdoors lovers. We are nestled along the Deschutes River which writhes up from the Cascade Mountains, and serves as the backbone for our small town.

From the river rafting and fly fishing opportunities to the vast array of mountain biking, dirt biking, hiking, skiing, snowboarding, rock climbing, golf, and other options we have in the area, we are incredibly proud to call Bend "home," and hope you have the chance to enjoy it as well before departure.

Upon arrival, Guided Groups will meet up for a welcome dinner and briefing, and Self-Guided Fly & RIDE adventurers will have their instructions for when we’ll be going through motorcycle check-in. Bring anything you want to mount on the bike, and we'll make sure you're all set and fit for the great ride ahead. The twisting of your wrist begins tomorrow. 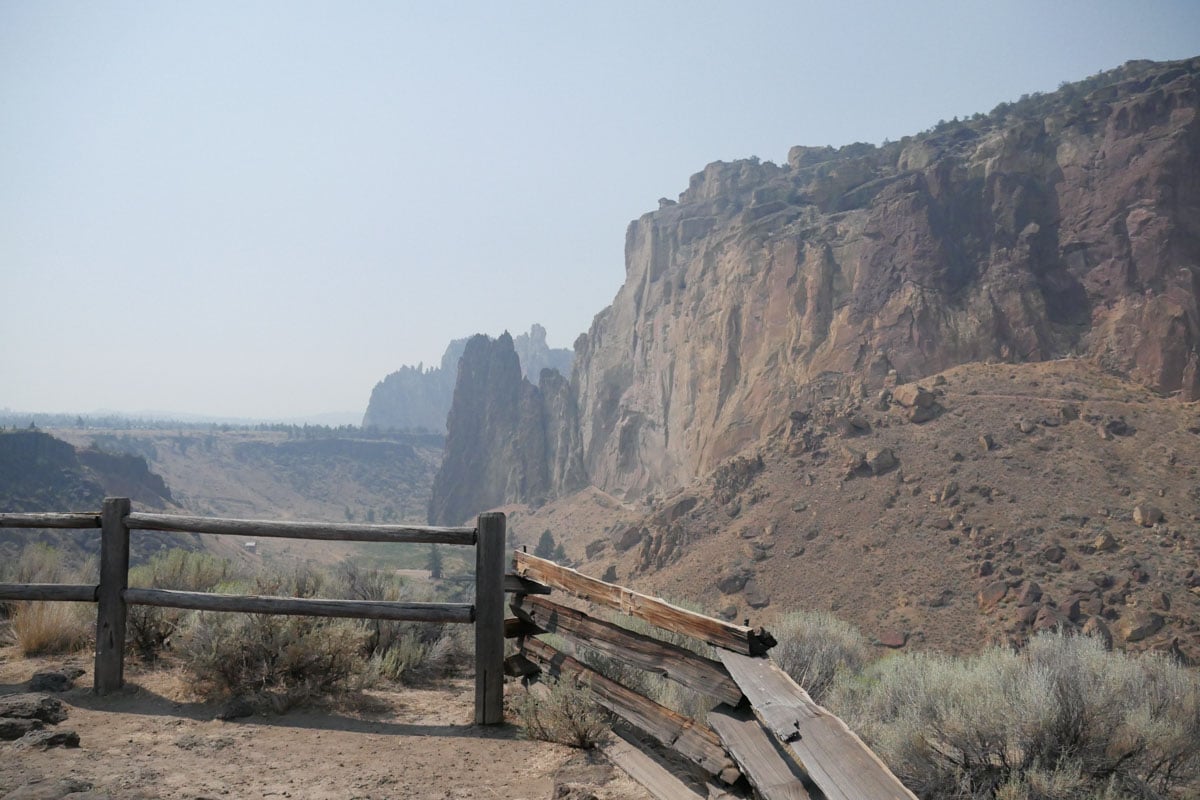 Try to pace yourself today as you get settled in on your motorcycle, we have an exciting dual-sport day ahead and many more days to go on this tour.

Enjoy the ride on simple dirt roads as we make our way to the largest volcano in the Cascade Volcanic Arc. Newberry Volcano has an area of 1,200 square miles when its lava flows are taken into account. Within the large 4x5 mile caldera are two gorgeous lakes: Paulina Lake and East Lake. Spiraling to the top of China Hat and climbing up to the Pine Mountain Observatory before twisting and turning our way through an un-believably beautiful scenic canyon.

Regarded as one of the best paved motorcycle rides in the state, the Crooked River will lead the way to another masterpiece it has created, Smith Rock State Park. This Oregon gem is the result of water cutting through rock created by volcanic activity dating back as far as 30 million years ago. Now, generally considered the birthplace of modern American sport climbing, it is world-famous for all types of outdoor recreation including traditional climbing, multi-pitch climbing, bouldering, hiking and mountain biking to name a few. 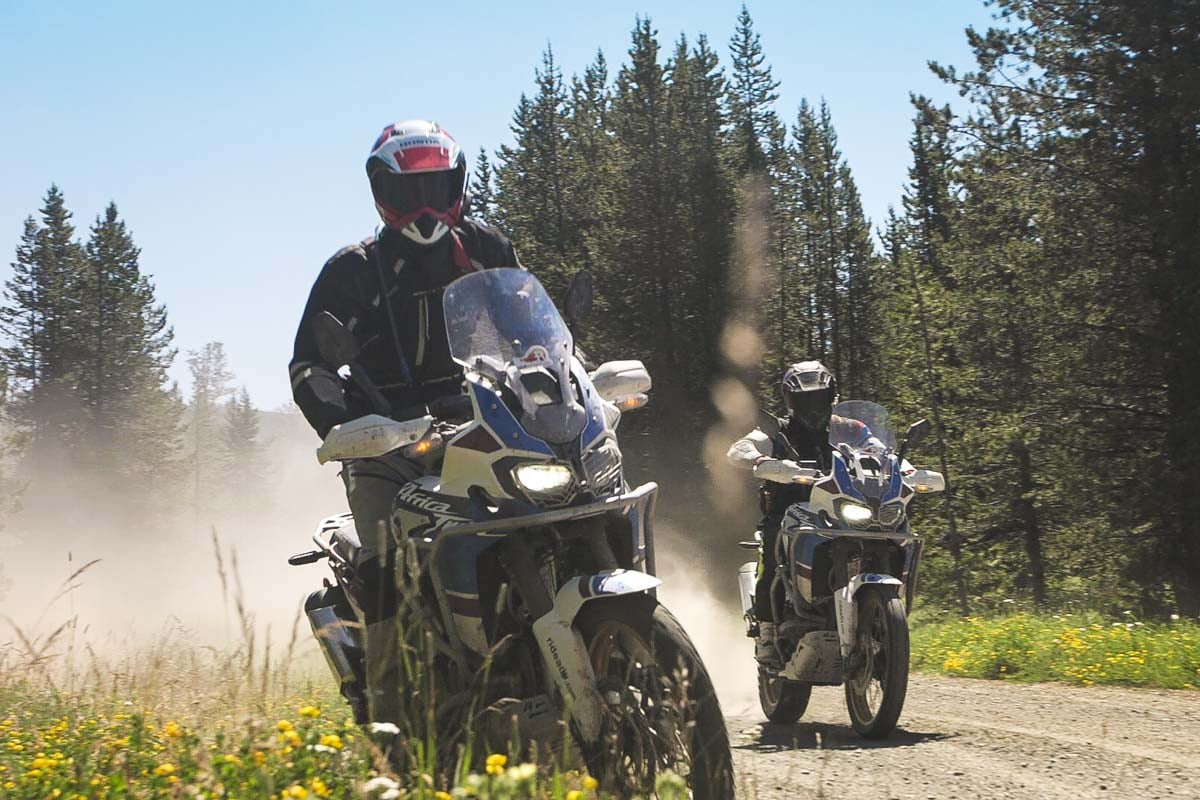 Prepare yourself for tight pavement twisties and sweepers this morning, the McKenzie Highway has a real treat instore for us. Like nothing you’ve ever seen before, the dark, broken lava field that stretches for 65 square miles presents an out of this world moonscape. The result of eruptions from Belknap Crater 2,000 years ago, it is the most recent and remarkable examples of volcanic activity in North America.

As we jump into the dirt in Willamette National Forest, horrific burn scars are evidence of recent fires that ravaged through these forests destroying everything in its path including many homes. Crossing the Willamette Valley just north of Eugene into Lobster Valley, the scenic Alsea Highway will show us the way through the coastal range to Yachats on the beautiful Oregon coast.

Take a deep breath of the cool ocean breeze and relax after a big day. Yachats is referred to as the “Gem of the Oregon Coast” for it’s natural dramatic beauty, however, some say it carries a type of curse on account of the gruesome settlement history with native tribes. Nevertheless, a well-known travel magazine named this destination one of the "Ten Coolest Small Towns of the U.S.A.".

***NOTE: Part of the McKenzie Pass is typically closed November-June due to snow pack. 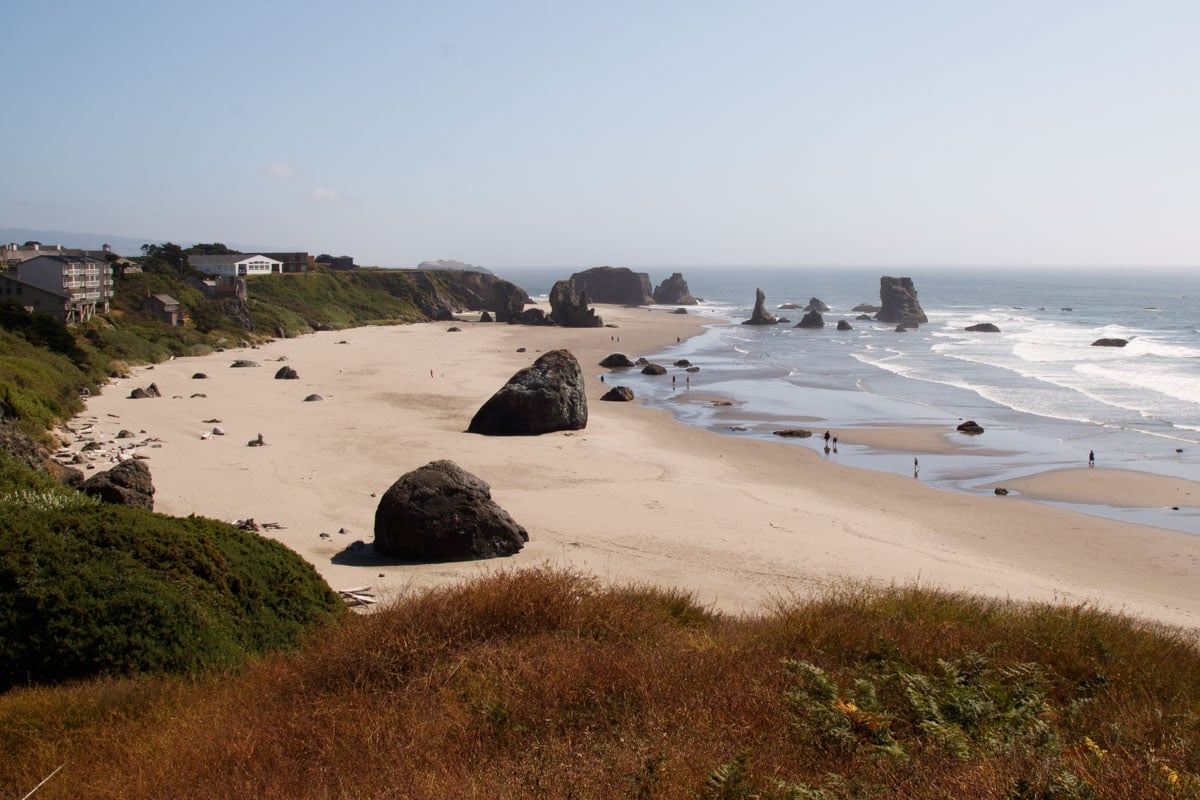 An exciting day of riding in the backcountry lies ahead, but first we cruise south on Highway 101, and maybe the most awe-inspiring section of the Oregon coast. Enjoy an imaginary cup of coffee as you leisurely soak in the breathtaking views of Cape Perpetua, home to famous sites such as Thor’s Well and Smelt Sands State Park to name a few.

Now that you’re awake after that tasty cup of imaginary joe, let’s get dirty climbing and traversing the coastal range, following the Suislaw river into the Suislaw National Forest. From there the Smith River will wind us down to the small fishing village of Winchester Bay for lunch, get ready for ultra fresh seafood. Best attempted before filling your belly though, you’ll get a chance to test your sand riding skills in the Oregon Dunes (don’t worry if you’re not up for the task, there is no required sand riding here).

With the ocean in the rearview mirror, the Umpqua River will show us the way inland to the Elliott State Forest, expect incredible mountaintop views, wildlife sightings and possibly herds of wild Elk grazing.

Before reaching our hotel accommodations in the popular hip coastal town of Bandon, we must navigate our way through Coos Bay, Oregon coast’s most populous city (16k residents) and the surrounding area known as “Oregon’s Bay Area” (32k residents).

If your schedule permits, you will be pleased to extend your trip package to include an extra night or two in Bandon, just let us know. Why spend extra time here? Bandon is a central point for the nearby Oregon Dunes National Recreation Area, a 40 mile and 7,000 acre stretch of sand-covered beach dunes. Here you can rent dune buggies, ATV’s, UTV’s, and other fun machines and have a BLAST out there exploring. (Twin cylinder adventure bikes unfortunately won't cut it. Too heavy!)

If fishing is your game, the Pacific halibut season kicks off in May and salmon and tuna run through the summer months. Bay crabbing and clamming is also a local favorite as is fresh water fishing in lakes and rivers offering rainbow and cutthroat trout and Chinook salmon. In addition, golfers can take advantage and enjoy the world-class Bandon Dunes Golf Courses nearby, making perhaps the perfect Rest Day from the motorcycle. 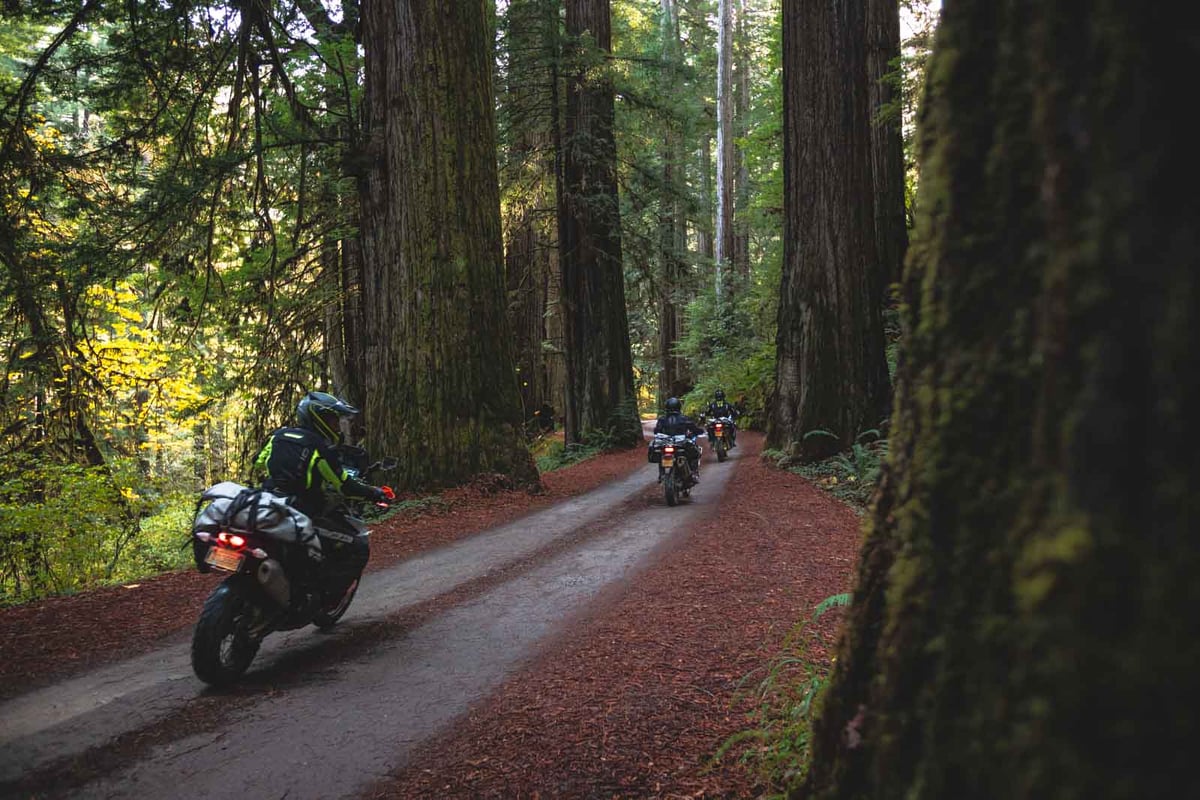 Twisty mountain roads will lead us to an unusual historic building with an intriguing history almost as fascinating as contents of the museum it now houses. It’s no surprise that Oregon has a deep rooted logging history and the Coos County Logging Museum is a fun place to learn about it with it’s extensive collection of antique logging equipment and rare photographs.

With our new knowledge of Oregon’s logging history, we head into the Rogue River-Siskiyou National Forest and Oregon Redwoods, maybe with a different perspective and appreciation for the precious natural resource that is these forest.

Finally, we arrive in Crescent City, our only night in California. Did you notice the tsunami warning signs all over town? Wander the Crescent City waterfront and marvel at how this city was entirely rebuilt after a devastating tsunami in 1964. The city’s offshore geography makes it unusually susceptible to tsunamis caused by faraway earthquakes in such places as Alaska and Japan. Also known for it’s picturesque lighthouses and 1865 shipwreck rumored to hold 1.5 tons of gold coins and bullion, much of which has never been recovered. 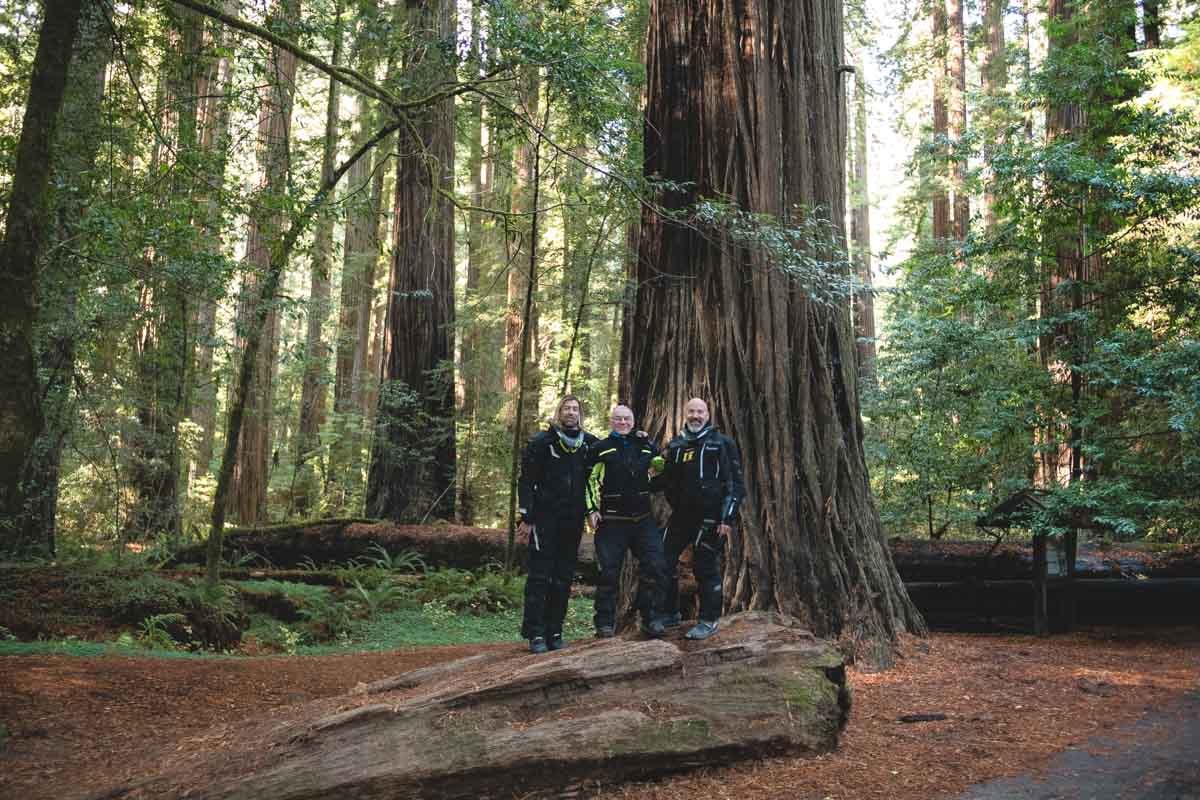 Skipping the foreplay today, we’ll reach our redwood climax before this morning’s coffee has time to kick in. Some say that size doesn’t matter, but that’s only cause they haven’t experienced the ancient majestic giants in the Jedediah Smith Redwoods State Park These Redwoods (Sequoia sempervirens) can grow to be 360+ (110m) tall, and have a trunk diameter of 22 feet (7m) at their base. Absolutely jaw-dropping, for those who’ve never seen them in person, let alone ridden a motorcycle under their canopy. Living often over 600 years, and up to as much as 2,000, fossil records indicate the Redwood species as going back to the Jurassic period, some 160 million years ago.  (And yes, those were the Redwoods Luke Skywalker was riding through in 1983’s “Return of the Jedi”).

It might feel as if the day climaxed prematurely, but don’t worry, we have a long day of fun ahead with more fantastic dirt riding as we head into the Smith River National Forest and cross back into Oregon on backcountry mountain ridgelines. Somewhere deep in the Siskiyou Mountains, eons of acidic water seeping into marble rock created and decorated the wondrous “Marble Halls of Oregon.”

A quick stop at the Oregon Caves National Preserve before we end the day in Grants Pass nestled along the Rogue River. True to its motto, "It's the climate!", Grants Pass has a Sunset Zone 7 climate. 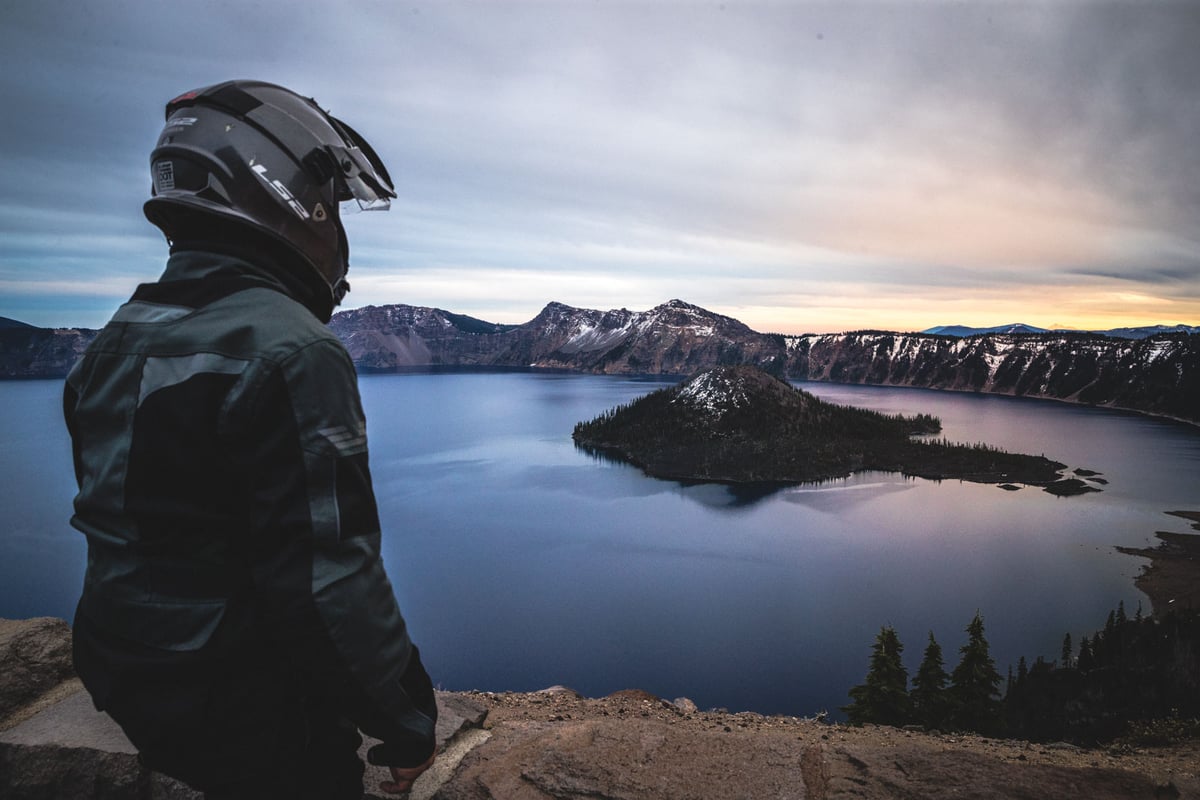 On our final (and longest mileage) day, we’ll head north along parts of the original fur trading route of the Siskiyou Trail in the Siskiyou National Forest.

Back in the Cascade Mountains now,  the collapse of Mount Mazama about 7,000 years ago, formed the deepest lake in the U.S. at 1,949 feet (the deepest lake in the U.S., the second-deepest in North America and the ninth-deepest in the world). Crater Lake is the fifth-oldest national park in the United States and, believe it or not, the only national park in Oregon. Following the unpaved Windigo Pass north towards Cascade Lakes Highway, along the shores of Hosmer, Elk, Sparks and Devil's Lakes, and past Mount Bachelor, we’ll arrive once again at our origination point in Bend. Completing the circuit, probably with mixed emotions about the tour ending. 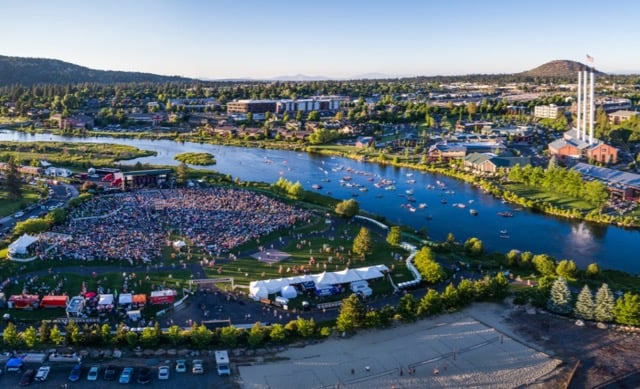 As we've noted and bragged about, Bend isn't just the kind of town you'll want to pass through in a hurry. Inquire with us about arranging extra time in this fun small mountain town, and anyone interested in hiking, mountain biking, kayaking, rafting, rock climbing, golf, just floating the river, or even skiing (often possible through May) should plan on staying a bit longer.

As described by Eric in the original announcement of our Bend-based rental fleet, you may end up living here someday, too!